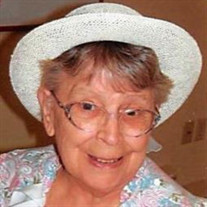 WESTBROOK—Barbara A. Knowles, 86, passed away February 25, 2021 at the Barron Center in Portland where she had resided for the last two and a half years. She was born September 14, 1934, a daughter of Charles and Lillian (Trefethen) Brogan. Barbara experienced a significant loss early in life losing her mother at the age of two. She graduated from South Portland High School and was married to Louis Alexander. They had four children while living the military lifestyle, constantly moving from state to state. Barbara was later married to Richard Knowles in 1975. Barbara held various jobs throughout the years, but her most important job title was Mom. She absolutely loved the holidays, especially Christmas. Nothing brought her more joy than opening gifts on Christmas Eve at her daughter’s home. Some of her favorite past times include playing Bingo, watching the Patriots (especially Tom Brady), and traveling out west with her husband Richard. She loved to have manicures and “look pretty” always wearing make-up and jewelry. From 2002 to 2018, Rocky Hill in Westbrook was her home where she happily resided. During her time there, she especially enjoyed attending Elder-Works programs. Above all, Barbara loved her family dearly. She always looked forward to outings and visits with her children and grandchildren. She was predeceased by her parents, including her step-mother, Florence Brogan; second husband, Richard Knowles; and her siblings, Robert, Keith, Chuck, Raymond, Pat and June. She is survived by her four children, George Alexander and his wife Alice, Cindy Thibeault and her husband Mark, Louis Alexander and his wife Antionette, and James Alexander and his wife RaeDawn; 13 grandchildren and 16 great grandchildren. The family would like to thank the staff at the Barron Center for the care they provided Barbara. The family will be holding a private memorial service. Visitation will be held on Wednesday, March 3 from 2pm to 3pm at the Westbrook Chapel of Dolby Blais & Segee, 35 Church St., Westbrook. In lieu of flowers, memorial donations in Barbara’s name may be made to: The Animal Refuge League of Greater Portland at https://arlgp.org/.

WESTBROOK&#8212;Barbara A. Knowles, 86, passed away February 25, 2021 at the Barron Center in Portland where she had resided for the last two and a half years. She was born September 14, 1934, a daughter of Charles and Lillian (Trefethen) Brogan.... View Obituary & Service Information

The family of Barbara A. Knowles created this Life Tributes page to make it easy to share your memories.

Send flowers to the Knowles family.