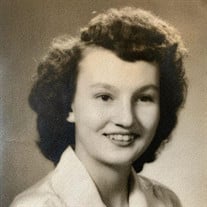 Barbara King, 88, of Gorham, passed away on September 26, 2020 at her home with her family. She was born on June 15, 1932 to parents Daniel and Velma Harding in Madison, Maine. Growing up, Barbara attended many different schools, as her dad, Daniel Harding worked for the Maine Bridge Commission requiring frequent re-locations. Her high school years though, were spent in Camden, Maine. Here she played on the girls’ basketball team, took part in school plays, and played the saxophone in the band. After graduating in 1950, she married Harold A. Clough from Kennebunkport. They had three children together, living in Kennebunkport and later Falmouth, Maine. They were married until 1962. Barbara returned to Camden with her children. She later married Bruce King from Rockland, Maine. Barbara was known by those who knew her as a kind and loving person. She worked in healthcare for many years. Both as a nurses’ aid and a physical therapy aid. She loved doing both, but her secret love was sewing. She was an accomplished seamstress and for a time sold woolen goods from her home. Some will remember her for the beautiful leather coats made by her loving hands. Barbara loved to cook. It was one way she showed her love to her family and friends. Other things she loved to do were, knitting, crocheting, dancing, and spending time at the camp, built by her father, on Norton’s pond. Barbara is predeceased by her parents, Daniel W. and Velma M.(Clark) Harding, and her brother, Everett Harding. She is survived by her children, Dawn Wentworth and husband Peter, Mark Clough and wife Kristin, Cynthia Dongo and husband Scott, and her step-daughter Jean Conway and husband Charlie, nine grandchildren, Jeffrey Earl, Amber Landre, Ryan Wentworth, Megan Reid, Christopher Clough, Donald Clough, Kelly Alden, Sean and Troy Dongo, two step grandchildren, Gail and T.C. Conway, fourteen great grandchildren, Jeremy Earl,Ashley Kane, Mason and Roman Landre, Gavin and Caden Lavoie, Ophelia Reid, Julia and Ian Clough , Ethan, Rylee and Emily Clough, Eva and Lucas Alden, and one great, great grandchild, Camden Kane and her longtime companion, Willis Stone of Appleton, ME. There will be no visiting hours and a private burial service and celebration of life will be planned for next spring.

Barbara King, 88, of Gorham, passed away on September 26, 2020 at her home with her family. She was born on June 15, 1932 to parents Daniel and Velma Harding in Madison, Maine. Growing up, Barbara attended many different schools, as her dad,... View Obituary & Service Information

The family of Barbara King created this Life Tributes page to make it easy to share your memories.

Send flowers to the King family.