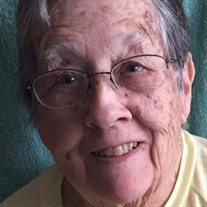 WESTBROOK - Barbara E. Gaudette, 91, passed away on Sunday, November 21, 2021 at Coastal Manor in Yarmouth. Barbara was born on August 28, 1930 in Boston, Massachusetts, the daughter of William L. and Ruth (Smith) Erkelens. Barbara resided in Westbrook her entire life and was raised by her aunts, Cora and Carrie, and her mother, Ruth. She graduated from Westbrook High School’s Class of 1948. After graduation, she went to work for John Hancock Life Insurance Company and later on, worked for Fleet Bank, now Bank of America, where she retired. She married Joseph “Bob” Robert Gaudette in October 1952 and they resided in Westbrook together until his passing in 2004. Barbara is survived by her sons, Robert and his wife, Karen of Gorham and Stephen and his wife, Beth, also of Gorham; four grandchildren, Ashley (Paul), Julia (Larry), Kaitlin (Nick), and Matthew; and one great-granddaughter, Olivia Jayne. Barbara loved her family dearly and nothing made her more proud than her children, grandchildren and her new great-granddaughter. The family would like to thank the staff at Coastal Manor for their care for Mom during the last three months as well as Dr. James Donahue. As Barbara has requested, there will be no visiting hours and burial will be private at St. Hyacinth’s Cemetery in Westbrook.

The family of Barbara E. Gaudette created this Life Tributes page to make it easy to share your memories.

Send flowers to the Gaudette family.