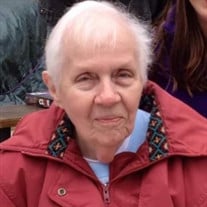 Barbara C. Beesley passed away November 27, 2021 at her Westbrook home. She spent the last week of her life, as she had spent her entire life surrounded by her loving family. Barbara was born on January 10, 1935 in Rockland, Maine to Wilbur and Charlene (Foster) Philbrook. Growing up she was in Girl Scouts and Rainbow Girls. Education was extremely important to Barbara. She graduated from South Portland High School and earned her BS from Portland Teacher’s College, then her Masters from Orono. In 1954 Barbara married the love of her life, Walter W. Beesley. They moved into their home at Cottage Place where they raised their four children, watched their grandchildren play and have overnights, and entertained their great grandchildren with stories like The Kitchen Closes at 5:00 and grand Christmases. To be sure, Christmas was her favorite holiday. She loved sending out her holiday message to everyone asking for a gift list. She would then begin her search for the best deals, one of her favorite activities! She was actually on the front page of the Press Herald one year for being the first person in line on Black Friday at Porteous. Of course, she also set out early the day after Christmas to get good deals on wrapping paper for the following year. Barbara and Walter were together 56 years. During that time their focus was always on family and community. Together they volunteered with Boy Scouts, Jaycees and at the Westbrook-Warren Congregational Church. Barbara served as the chair of their Education Committee for several years. She participated in the Cumberland County Retired Educators Association, Westbrook Women’s Club and book club. Barbara spent twenty-five years teaching in Westbrook, mostly as a first grade teacher. She will always be remembered as a dedicated teacher who loved math and literacy. She got a kick out of introducing children to Clifford the big red dog and could always be counted on to have a drawer full of chocolate for when her colleagues needed it. After retiring, Barbara volunteered in two kindergarten classrooms, one being her daughter’s. There are many memories and stories when someone has had a life well lived, but for Barbara her most important legacy was her family. This included her loving husband Walter and her granddaughter, Candace who both predeceased her. She was also predeceased by her parents and brothers Wilbur Jr. and Robert Philbrook. She will live on in her children, Walter and his wife Helen of Winthrop, Cassandra of Westbrook, Kenneth and his wife, Suzanne of Scarborough, and Roger of Westbrook, her ten grandchildren and sixteen great grandchildren. A funeral service will be held at Westbrook-Warren Congregational Church on Friday, December 3 at 10:00 AM. (Masks are required please.) The family asks that you celebrate Barbara's life by giving to Westbrook Warren Congregational Church UCC Pilgrim Lodge Scholoarship Fund or the Cumberland County Retired Educators Association Scholarship.

Barbara C. Beesley passed away November 27, 2021 at her Westbrook home. She spent the last week of her life, as she had spent her entire life surrounded by her loving family. Barbara was born on January 10, 1935 in Rockland, Maine to Wilbur... View Obituary & Service Information

The family of Barbara Charlene Beesley created this Life Tributes page to make it easy to share your memories.

Send flowers to the Beesley family.