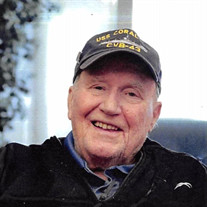 GORHAM – Arthur M. “Sonny” Spink, Jr., 91, passed away peacefully on March 12, 2022 at a Portland nursing home. He was born in Brooklyn, NY on November 17, 1930, the son of Arthur M., Sr. and Sevia A. (Brown) Spink. Arthur grew up in Brooklyn, NY and attended New York City Public Schools. He joined the U.S. Navy in 1948 and served for four years aboard the USS Dayton L105 and the USS Coral Sea CVB-43. In 1953 Arthur married Jane Hastings and together they raised a family and shared 45 years of marriage, until her passing in 1998. Sonny spent many years working at First National Stores and Warehouse & Bakery until their closure. He went on to work at GTE Sylvania for 22 years until his retirement. Sonny became involved in freemasonry in 1954 was a 32nd degree Mason and life member of the Valley of Portland. He was a patron of the Order of the Eastern Star and was a life member. He was a member of the American Legion Post #197 Westbrook and the Portland Elks Club #188. Sonny loved to bowl and was in many leagues. In addition to his wife and parents, Arthur was predeceased by his sons, Robert and Stuart Spink; and sister, Willamina Webster. He is survived by his sons, Ken Spink and his wife, Jan, Richard Spink and his wife, Diane, Artie Spink and his wife, Sue, and Donald Spink and his wife, Marie; grandchildren, Angie, Kevin, Amanda, Kayla, and Jennifer; and great-grandchildren, Jayden, Ella, Trinity, Hunter, and Ashley. A memorial service will be held, 11 a.m., Wednesday, March 23, 2022 at the Windham Chapel of Dolby, Blais & Segee, 434 River Rd.

The family of Arthur M. Spink Jr. created this Life Tributes page to make it easy to share your memories.

Send flowers to the Spink family.