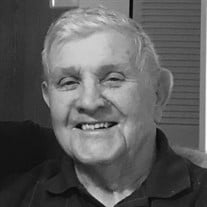 WESTBROOK- Arthur Bernard Currier, 95, passed away July 11, 2020 at the Gosnell House in Scarborough. He was born December 14, 1924 a son of Arthur Sr. and Alice (Michaud) Currier. Arthur went to Westbrook schools and enjoyed playing sports, he excelled in football and basketball. He then enlisted into the Navy and proudly served our Country during World War II on the USS Conner DD 582, earning 13 battle star medals during his time of service. When Arthur came home from the military, he married the love of his life, Mariette (Labreque) and the two of them raised their three children together. Arthur and Mariette spent 59 years of marriage together before her passing. Arthur loved spending time with his family and loved taking care of them. He went out of his way to see that they were happy. Arthur spent his working career at the S.D. Warren Company and was employed there for 42 years before retiring as a Release Supervisor. In his free time, Arthur loved to bowl, golf, and play cards with his family and friends on Sunday nights. He also enjoyed gardening and growing vegetables, due to his color blindness; he wasn’t always able to tell if tomatoes were red or still green but always picked the first tomato of the year for Mariette anyway. He was a great husband and father will be missed dearly by those that knew him. Arthur is predeceased by his loving wife, Mariette (Labreque) and a brother Robert Currier and his wife Francine. He is survived by his three children; daughter Katherine Belanger and husband Paul of Westbrook, daughter Susan Divney and husband Daniel of Gray, and son David Currier and wife Carol of Westbrook. Grandchildren; Debra Smith, Sherri Stockwell, Tina and Robert Burton, Eric and Erica Divney, Timmy Currier, Chris Currier, Rick and Erin Haskell. Great Grandchildren; Jeffrey Smith, Allison Smith, Nicholas Burton, Eden Divney, Kaleb Divney, Benjamin Divney, Taylor Currier, Mitchell Haskell, Mollie Haskell, and Addison Currier. He is also survived by brother William Currier and his wife Janet. Services will be private because of the Covid-19 pandemic. Interment will take place at St. Hyacinth’s Cemetery, Westbrook.

The family of Arthur Bernard Currier created this Life Tributes page to make it easy to share your memories.

Send flowers to the Currier family.