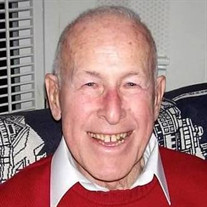 GORHAM - Arnold “Chuck” Eames, 91, died peacefully on January 3, 2022 with family by his side. He was born on February 10, 1930 in West Paris, Maine, the son of the late Arnold R. and Beatrice (Martin) Eames. After graduating from Falmouth High School, he went to RPI where he received his undergraduate degree in mechanical engineering. Chuck continued his education and ultimately received his doctorate in Chemical Engineering from the Institute of Paper Chemistry at Lawrence University. After RPI, he served as a Marine in the Korean War. His career at S.D. Warren spanned almost three decades, during which he made many contributions to the paper industry. Chuck married Marjorie Burnell on July 31,1954 and they were married for 67 years and had three daughters, Judy Wing (Michael), Laurie Bernier (Don), and Martha LaViolet (Gary). Chuck and Marge were a solid foundation for their family, holding strong values and steadfast faith. Upon early retirement (age 56), Chuck pursued other personal interests which included the construction of two of his daughters’ homes, and many other projects for the family. These projects were completed with his brother-in-law (best friend), Stretch Crawford always by his side. One major project was the building of the family summer camp at Little Sebago Lodges, and this camp continues to be a central gathering place for the whole family today. As a member of Westbrook Warren Congregational Church, Chuck served as a treasurer, Sunday school teacher, and faithful steward. His curiosity led him down different paths, ranging from creating paintings, exploring the latest computer technology, preparing taxes for others, and traveling with his wife. Chuck remained active throughout his lifetime. He enjoyed waterskiing, snow skiing, camp games of horseshoes and cornhole, and playing a favorite family card game of 63. Reading was a favorite pastime, even delving into Harry Potter books to keep up with his grandchildren. Friendships were important to him, and he maintained connections to friends all over the globe. In addition to his parents, Chuck was predeceased by two infant daughters, Beverly and Geneva; and a brother, Philip. He is survived by his wife, Marge; sister, Christine Pfeffer; three daughters and their husbands; eight grandchildren and spouses: Josh (Jenna) Wing, Seth (Jocelyn) Wing, Matt (Hannah) Bernier, Michelle (Brett) Ferry, and Jennifer Bernier, Luke (Tania) LaViolet, Jacob (Paulina) LaViolet and Adam (Dylan) LaViolet; ten great-grandchildren and many nieces and nephews. The family wishes to extend deep appreciation to Chuck’s caregivers at Gorham House (Cambridge and Windsor II) who, along with the Compassus team, provided loving and compassionate care. Visiting Hours will be held 3-5 p.m., Friday, January 21, 2022 at Westbrook-Warren Congregational Church, 810 Main Street, Westbrook with a memorial service 11 a.m., Saturday, January 22, 2022. In lieu of flowers, those who wish, may make a donation in Chuck’s name to WWCC’s Memorial Fund. To express condolences and to participate in Chuck’s online tribute, please visit www.DolbyBlaisSegee.com

The family of Arnold "Chuck" Eames created this Life Tributes page to make it easy to share your memories.

Send flowers to the Eames family.