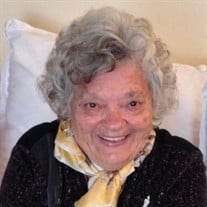 WINDHAM - Antonia (Krenn) Casey, 91, passed away peacefully on January 14, 2022 at Maine Medical Center in Portland. She was a beloved mother, sister, aunt and grandmother. She was a resident of Westbrook for over 50 years after spending her early life in Austria where she was born. Born on November 22, 1930 in Rudersdorf, Feldkirchen, Austria, Antonia was the daughter of the late Anton and Josefa Krenn. She grew up and attended schools in Graz, Austria. Following the end of World War II, she moved to Geneva, Switzerland for seven years where she worked in various roles before returning back to Austria. In the early 1960’s, she crossed the Atlantic on an ocean liner arriving in New York before joining relatives in Maine. It was during her stay with relatives in Westbrook, Maine, where she met her future husband, Stanley. Antonia was a stay-at-home mom for over a decade before taking a position with Fairchild Semiconductor. She later left Fairchchild to join the Westbrook school system as one of the custodians at Congin Elementary School. She loved working at Congin and would often ride her bicycle to work. For over a decade, Antonia was an active member in the German American Club in Portland where she enjoyed the friendship of fellow German speaking women, and participating in social events and parties including an annual Oktoberfest event. Antonia had an easy-going and fun-loving personality and was always happy to see an old friend or make a new friend. She loved to travel, including frequent trips back to Austria to visit family. She was proud of her Austrian heritage and she enjoyed hosting family and friends and often served delicious Austrian dishes such as weinersnitchel at her home. Antonia was a dog lover and for many years you could find her walking around the neighborhood with her dog, Sparky. Antonia was predeceased by her husband of 45 years, Stanley W. Casey, Jr.; and will be greatly missed by her three daughters, Heidi DiStefano and her husband, Michael of Wells, Maine; Melinda Doane and her husband, Timothy of Safety Harbor, Florida; and Kim Carignan of Windham, Maine; son, Manfred Krenn and his wife Doris of Grassnitzberg, Austria; sister, Elisabeth Soral and her late husband, Hubert Soral, of Graz, Austria; brother, Waldemar Krenn also of Graz, Austria; granddaughter, Rebecca Krenn; grandsons, Travis Carignan, Anthony Carignan, Gernot Krenn, Joseph Winslow, Kevin Winslow and Ryan Winslow; two great-grandsons, and numerous nephews and nieces. Antonia was also the loving sister of the late Anna Grubbauer and her late husband, Karl Grubbauer. Relatives and friends are invited to attend a Mass of Christian burial, 11 a.m., Saturday, January 22, 2022 at St. Hyacinth’s Church, 268 Brown St., Westbrook followed by a reception at Stockhouse Restaurant, 506 Main St., Westbrook.

WINDHAM - Antonia (Krenn) Casey, 91, passed away peacefully on January 14, 2022 at Maine Medical Center in Portland. She was a beloved mother, sister, aunt and grandmother. She was a resident of Westbrook for over 50 years after spending her... View Obituary & Service Information

The family of Antonia R. Casey created this Life Tributes page to make it easy to share your memories.

Send flowers to the Casey family.