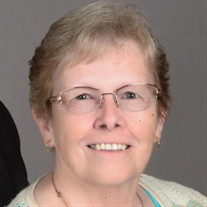 WINDHAM - Anne E. (Nash) Cummings passed away peacefully with family by her side on Wednesday, July 29, 2020 at Gosnell Memorial Hospice House in Scarborough, Maine after a courageous battle with cancer. She was 71 years old. Anne was born on December 4, 1948 in Lincoln, Maine to Arthur E. Nash, Sr. and Madeline E. (Sibley) Nash. The youngest of four siblings, Anne was predeceased by her mother, father and her brother, Arthur E. Nash, Jr. She is survived by her husband of 52 years, Clarence C. Cummings; her two sons and their spouses, Scott and Karen Cummings of Windham, and Steven and Melissa Cummings of Limington; five grandchildren, Ashley, Sarah and Connor Cummings and Kailee and Drew Cummings; two sisters, Christine (Nash) Gary of Lincoln and Tammy (Nash) Burrell of North Yarmouth; and several nieces and nephews. Anne graduated from Mattanawcook Academy in Lincoln in 1966. In addition to caring for her family, she spent many hours going to school at night while working full time and graduated with a degree in nursing from EMVTI in 1988. She worked her way through nursing licensing, moving to an LPN and finally to an RN and spent most of her adult life caring for others as a nurse. She worked for many years at Colonial Acres Nursing Home in Lincoln, Maine caring for those who were in need. She and her husband eventually moved to Windham, Maine in 2004 to be closer to her children and grandchildren. At that time, she began working at The Cedars in Portland where she eventually retired in 2017. She also loved traveling, reading, and doing word puzzles. Anne’s family would like to thank the many staff and caregivers of Maine Medical Center, Hospice of Southern Maine and the Gosnell Memorial Hospice House for the kind care, attention, and comfort they gave to Anne during her time with them. Graveside services will be held, August 15, 2020 at 1pm at the Park Street Cemetery in Lincoln, Maine. In lieu of flowers, memorial donations may be made to Hospice of Southern Maine at 390 US Route One, Scarborough, ME 04074, or given online at www.hospiceofsouthernmaine.org/give.

WINDHAM - Anne E. (Nash) Cummings passed away peacefully with family by her side on Wednesday, July 29, 2020 at Gosnell Memorial Hospice House in Scarborough, Maine after a courageous battle with cancer. She was 71 years old. Anne was born... View Obituary & Service Information

The family of Anne E. Cummings created this Life Tributes page to make it easy to share your memories.

Send flowers to the Cummings family.