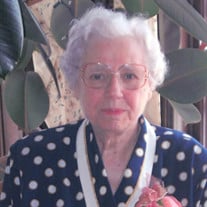 Anna Magdalena Bittner (Feitz), 97, of Westbrook, devoted wife, mother, and grandmother, passed away peacefully at Gorham House surrounded by her loving children and grandchildren on April 2, 2022. She was born May 8, 1924 in New York to Elizabeth (Gitzing) and Mathias Feitz. On August 4, 1945 she married Burton Andrew Bittner in New York and in 1950 they moved to Westbrook, Maine where they made their home. They had 2 children, Holly and Matt, she loved her family dearly and enjoyed spending time with them. Anna became involved with many humanitarian organizations; volunteering for the Westbrook Welfare Department, Good Samaritan Club, Westbrook Food Bank and Meals on Wheels well into her 90s. She was a woman of strong faith and often volunteered for church functions. One of Anna’s greatest passions was traveling. She worked as a travel agent for Jackie Hebert Travel for many years. She enjoyed planning many bus trips, cruises, and international trips for the Westbrook Seniors. She was accompanied on these trips by her loving husband, children, and many friends she had made over the years. One of Anna’s favorite trips was with Burt and her nephews on a 6-month cruise around the world. She and Burt enjoyed housing exchange students from around the world. These were connections that created lifelong friendships and many visits to the students in their homelands. Anyone who knew Anna knew she enjoyed playing Bingo, cribbage and card games. She considered everyone a friend and had a generous heart, helping anyone who needed it. In addition to her parents, she was predeceased by her beloved husband of 57 years; her brother, Nicholas Feitz; sister, Elizabeth Reiter; sister, Catherine Bartl; and son-in-law, Gary Bricker. She is survived by her daughter, Holly Bricker of Auburn, ME; son, Burton “Matt” Bittner and wife, Julia Nichols of Yarmouth, ME; granddaughter, Johnna Wallace and her husband, Paul of Westbrook, ME; granddaughters, Jennifer and Betsy Bricker of Auburn, ME; grandson, Patrick Bittner and his fiancé, Becca Shaw of Gorham, ME; great-grandsons, Collin Brookings, John Wallace, and Gavin Wallace of Westbrook, ME and Michael Gallant of Auburn, ME; and great-granddaughter Emma Gallant of Auburn, ME; as well as several extended family members. The family would like to thank the wonderful staff at Gorham House for their kind and compassionate care during the last 3 years. The family would also like to thank the caring staff of Beacon Hospice for their compassionate care over the last 6 months as well. The family invites you for a time of visitation Tuesday, April 12th from 4:00pm to 6:00pm at Dolby, Blais, Segee Funeral Home, 35 Church St., Westbrook. A Mass of Christian Burial will be held on Wednesday, April 13 at 10:00am at St. Hyacinth Church, 268 Brown St., Westbrook. In lieu of flowers please consider a donation to the Westbrook Food Bank.

Anna Magdalena Bittner (Feitz), 97, of Westbrook, devoted wife, mother, and grandmother, passed away peacefully at Gorham House surrounded by her loving children and grandchildren on April 2, 2022. She was born May 8, 1924 in New York to Elizabeth... View Obituary & Service Information

The family of Anna Bittner created this Life Tributes page to make it easy to share your memories.

Send flowers to the Bittner family.