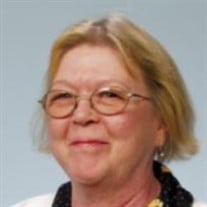 Andrea W. Varnum, 78, passed away on March 28, 2022. She was born February 8,1944, in Portland, the daughter of Franklin B. and Patricia (Whipple) Young. Andrea graduated from Danbury High School in Connecticut in 1961. After raising two children while working as a lab technician, she returned to school and earned her BSN from St. Joseph’s College in 1990. She spent the rest of her career as an RN, retiring from the Maine Medical Center Emergency Department in 2013. Nursing was the greatest part of her life, and she thrived on the daily challenges of the ER, contributing to the improvement of nursing practice, and the bond that she shared with her nursing colleagues. She was an adventurous spirit who loved music, travel, a purple stripe in her hair, and dark polish on her nails. When she wasn’t at work, her favorite place to relax was at the family cottage on Sebago Lake. Andrea is survived by her husband of 32 years, Brian, her son Damon M. Jordan and wife Kathleen, of Brunswick; her daughter Kimberley J. Habig and husband Alec, of Duluth, Minnesota; siblings Franklin B. “Jay” Young, Jr. and wife Susan, of Lakewood Ranch, Florida; Dorcas Young, of Sebago; and Sara Y. Stevenson and husband Greg, of Westbrook; five grandchildren, Kayla, Travis, Karl, Sydney, and Frank; three great-grandchildren, Aubrey, Scott, and Avery; three nieces, Katie, Rachael, and Christina, and one nephew, Whitney. The family would like to thank the staff at Casco Inn and Beacon Hospice for their warmth and compassion while she was under their care. Visitation will be held 10am - 12pm on Saturday, July 9 at Dolby, Blaise & Segee Funeral Home, 434 River Road, Windham, Maine. A small interment service for family will follow at Black Point Cemetery, Scarborough. In lieu of flowers, those who wish may make donations in Andrea’s memory to the Animal Refuge League of Greater Portland, the Friends of the Kotzschmar Organ, or the Maine Emergency Nurses Association.

Andrea W. Varnum, 78, passed away on March 28, 2022. She was born February 8,1944, in Portland, the daughter of Franklin B. and Patricia (Whipple) Young. Andrea graduated from Danbury High School in Connecticut in 1961. After raising two children... View Obituary & Service Information

The family of Andrea W. Varnum created this Life Tributes page to make it easy to share your memories.