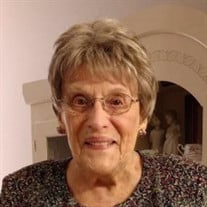 Alice Therese (Routhier) Valliere passed away on Sunday, December 20, 2020 in Fort Wayne, IN at the age of 97. Alice was born on November 3, 1923 in Berlin, N.H. to Arthur and Delphine (Samson) Routhier. She attended high school at the Presentation of Mary Academy in Hudson, New Hampshire, graduating in 1939. She studied at Rivier College in Nashua, NH and began her career working as a bookkeeper for several years at the city clerk’s office in Berlin, NH. During WWII she moved to Washington, DC., hoping to do her part to help with the war effort. Due to her keen intellect and attention to detail, she was highly sought after as a member of the secretarial pool. One of the memorable times in her life came when she was selected to serve as a “plotter” in the high security “Map Room” for the military officers planning battle strategies on the hanger-sized map of the world. On June 14, 1948, she married Norman J. Valliere at St. Anne’s Catholic Church in Berlin. They began their married life living in Massachusetts, where she put her skills to work supporting them while he completed his dental school education. In 1953, they moved to Westbrook, to open a dental practice and raise their family. Alice helped him establish the practice, handling all of the scheduling, billing and dental assisting responsibilities when they first opened. She continued doing the bookkeeping until he retired in 1991. For decades she also managed his dental insurance consulting service. They were happily married for over 50 years. They had many friends and were active members of St. Hyacinth’s Catholic Church in Westbrook. Alice and Norman were avid golfers and enjoyed their membership in the Portland Country Club. They shared many happy hours with a large, close-knit group of friends, visiting golf courses across the Eastern US and Canada. Alice was known and loved for her quick wit, sense of humor and relentless work ethic. She was active in the Westbrook Women’s Club and the Maine Dental Association Auxilliary. She served in all the leadership roles of these organizations, establishing life-long friendships. In their later years, Alice and Norman spent time in Florida each year, enjoying the warmer climate and the golfing opportunities with friends, both old and new. She was preceded in death by her husband, Norman, in 1999. She was also preceded in death by her sister, Edma Blais, her infant twins, Celeste and Charles, as well as her grandson, Anthony Valliere. Following Norman’s death, she continued to live in Florida year-round for almost 15 years, before moving to Indiana to be closer to her family. Alice is survived by her sons, Retired Navy Captain Claude Valliere and his wife Pamela (Russo) Valliere of Arlington, VA and Dr. Roger Valliere and his wife Dr. Brenda (Merkel) Valliere of Fort Wayne, IN. In addition, she is sorely missed by her beloved grandchildren: Benedict Valliere and his wife Danielle (Singer); Christine Valliere Carter and her husband, Edward; Monique Valliere Hunter and her husband James; Nicholas Valliere, Jeffrey Valliere and step-grandson Tyler Andrews and family. She was also blessed with two great-grandchildren: Alice Valliere and Addison Hunter. Visitation hours will be held on Friday, May 14 from 5 – 7 p.m. at Dolby, Blais and Segee Funeral Home, 35 Church Street, Westbrook, ME 04092. In lieu of flowers, the family requests that memorial donations be made in Alice’s name to St. Jude Children’s Research Hospital in Memphis, TN (stjude.org), a charity that Alice supported for many years. A Mass of Christian Burial will be celebrated on Saturday, May 15, 2021 at 11 a.m. at St. Hyacinth Church of the St. Anthony of Padua Parish in Westbrook, with the committal prayers and interment at St. Hyacinth Cemetery immediately following. To express condolences or to participate in Alice online tribute please visit www.DolbyBlaisSegee.com

Alice Therese (Routhier) Valliere passed away on Sunday, December 20, 2020 in Fort Wayne, IN at the age of 97. Alice was born on November 3, 1923 in Berlin, N.H. to Arthur and Delphine (Samson) Routhier. She attended high school at the Presentation... View Obituary & Service Information

The family of Alice Therese Valliere created this Life Tributes page to make it easy to share your memories.

Send flowers to the Valliere family.