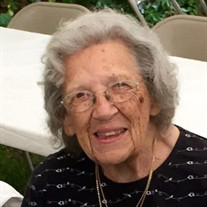 GORHAM- On Saturday, Feb. 6, 2021, Alice Keddy passed away at the age of 94 at Gorham House, in Gorham, Maine. Alice was born on Aug. 17, 1926, in West Paris, Me. to Floreston and Wilma Pierce. She graduated from Gould Academy in 1944 and then attended Central Maine General Hospital School of Nursing in Lewiston ME. becoming a Cadet Nurse during WWII. After the war she married her husband Royden, and worked as a Registered Nurse at Peter Bent Brigham Hospital in Boston, MA. Eventually Alice and her husband returned to Portland, ME. where she was a private duty nurse working for the Osteopathic Hospital and Maine Medical Center’s Pediatric unit. She cared for children during the polio epidemic, and often remarked, on how wonderful it was when a cure became reality with the discovery of the polio vaccine. Moving to Gorham, ME. in 1957, Alice spent the next 64 years devoted to her family, including raising two daughters, Carol and Kathy, enjoying long term friendships, and supporting the local community through volunteerism and compassion for others. Helping others was simply her way of life. She was a member of the Gorham Health Council and a long-term volunteer coordinator of the Gorham Medical Loan Closet. She was a 50-year member of the Gorham Women’s Club. She also supported the Baxter Memorial Library’s Books for Tots program, and was a member of the First Parish Congregational Church in Gorham. Alice was recently recognized by the Maine Health Care Association as a recipient of their 2020 “Remember Me” award. An award to residents in long term care facilities who have historically significant backgrounds, unique or interesting accomplishments, and those who have served community, state or country through volunteerism, civic organizations or US military. Alice also enjoyed traveling to many places around the world with her husband and family. Especially fond family memories came from yearly trips to Nova Scotia to visit relatives and close friends; a tradition kept alive by her children and grandchildren to this day. Alice was also an avid sports fan, including the Patriots, the Celtics, but most of all, her beloved Red Sox. She recounted the 25 cent bleacher seats during her years in Boston, and in more recent years, took many trips with her family to Florida for Red Sox Spring Training games. But her favorite times were spent watching her own grandchildren and great grandchildren at their sporting events, performances, and significant milestones. She was their number one fan. Alice was predeceased by her husband, Royden, her parents, her brothers, Myron, Maurice “Bud”, Floreston, Jr., and Franklin, as well as her sisters, Nina Hayes and Geraldine DeShon, and her son-in-law, Lyle Tracy. She is survived by her daughter, Carol Trottier, and son-in-law Roland, and her daughter, Kathryn Tracy; her three grandchildren, Neal Trottier, Alexandra Tracy and Cameron Tracy, and her two great-grandsons, Jacob Trottier and Adam Trottier. She is also survived by her sister, Maxine Roak, as well as many loving nieces and nephews. Alice’s family would like to extend sincere thanks to the caregivers at Gorham House and Beacon Hospice for their constant support, vigil and compassion for Alice, making her short stay safe and comfortable. Services for Alice will be planned at a future date later this year. In lieu of flowers, donations may be made in Alice’s memory to the: Baxter Memorial Library 71 South Street Gorham, ME 04038 Arrangements are in the care of the Gorham Chapel of Dolby Blais & Segee, 76 State Street, Gorham, Maine 04038.

The family of Alice Pierce Keddy created this Life Tributes page to make it easy to share your memories.

Send flowers to the Keddy family.