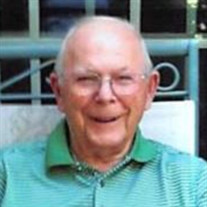 WESTBROOK - The family of Albert P. Rousseau, Sr. is mourning the passing of our wonderful dad, Pep, Pepere or Al to his friends. He was welcomed into this world by his parents, Rose (Gagnon) Rousseau and Alfred Rousseau on November 17, 1927. He was a lifelong resident of Westbrook, Maine. On July 31st, 1948, he married his loving wife Frances (Harkins). They were devoted to their family and each other until her passing in 2013. He began his working career in 1946 at S.D. Warren where he remained until his retirement in 1991. He and Frances were avid bowlers belonging to many leagues. He was a member of the Mechanical League, the Monday night Mill League, the S.D. Warren 10 pin league, and the Holy Martyrs couples league. Another of his favorite past times was golf. He held memberships at both Rivermeadows and Riverside golf courses. He and his friend, Hurb, could be found there almost daily until 2 years ago. He was fortunate enough to golf with one of his grandsons & great-grandsons right before he put away his clubs. When he wasn’t playing he was watching it on the television. At the age of 61, he received his GED. That was one of his proudest moments. It became a group effort with grandchildren guiding him along the way. He was an incredibly talented carpenter & woodworker. For many years he would create special gifts for his family. Anyone who received one of his creations cherished them. In fact, he began making treasured gifts for grandchildren & great-grandchildren. Al was an active member of the Westbrook Council Knights of Columbus. They knew who to rely on when any help was needed. He was there, at the drop of a hat, to lend a hand. He was a 4th degree Knight & proud member of the Color Corps. Pep was happiest when he was with his grandchildren and great- grandchildren. He would often be seen on the sidelines of soccer, baseball, football, and hockey games. He was an enthusiastic participant, to say the least. He felt that his family was his greatest gift. He told anyone and everyone how proud he was to be our Dad. He would always say, “I have the most wonderful family”. Truth be told, we were the blessed ones to have him for our dad. In addition to his wife, Frances, Al was predeceased by his son, Philip and infant daughter, Lori Anne. He is survived by his “3 girls”, Debra LaBrecque and her husband, Peter, Bonnie McClure and her husband, Dennis, and Lynn Rousseau. He is also survived by his brother, Robert; and many nieces and nephews. In addition to his daughters, he is survived by his grandchildren, Kristi (LaBrecque)Hamilton and her husband, Scott, Gregory LaBrecque and his wife, Angela, Eric LaBrecque and his wife, Stephanie, Jason McClure and his wife, Anita, and Jessica Houston; great-grandchildren, Ethan, Molly and Elizabeth Hamilton, Maya and Owen LaBrecque, Morrison and Kirby LaBrecque, Jayden and Alanna McClure, and Tyler and Zoey Houston. His daughter-in -law, Melissa Rousseau and her children, Jesse, his partner, Alyson and daughter, Kaylie Rose. Dawna-Marie Murphy, her husband, Marc, and their children, Thorian and Madox. Our family was supported by Hospice of Southern Maine during our dad’s final weeks. There are no words to express our gratitude to his exceptional team. Relatives and friends are invited to attend a visitation, 10-11 a.m., Monday, September 13, 2021 at St. Hyacinth’s Church, 268 Brown Street, Westbrook where a Mass of Christian Burial will be held at 11 a.m. Burial at St. Hyacinth’s Cemetery, Westbrook will take place 11 a.m., Wednesday, September 15, 2021. In lieu of flowers, memorial donations may be sent to Hospice of Southern Maine, 390 US-1, Scarborough, ME 04074.

WESTBROOK - The family of Albert P. Rousseau, Sr. is mourning the passing of our wonderful dad, Pep, Pepere or Al to his friends. He was welcomed into this world by his parents, Rose (Gagnon) Rousseau and Alfred Rousseau on November 17, 1927.... View Obituary & Service Information

The family of Albert "Al" P. Rousseau Sr. created this Life Tributes page to make it easy to share your memories.

WESTBROOK - The family of Albert P. Rousseau, Sr. is mourning...

Send flowers to the Rousseau family.