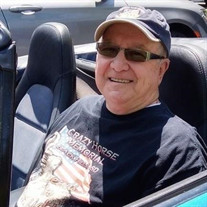 Albert “Al” Doyon, 79, passed away on May 26, 2020, after contracting the COVID-19 virus. Al was born on February 14, 1941, the oldest of two children, to Laurent P. and Emilia (Larochelle) Doyon. He grew up in Lewiston, Maine and graduated from Saint Dominic High School in 1959. After graduation he worked at Pine Street Pharmacy in Lewiston. Al joined the Army in 1960 as a medical lab specialist. He was extremely proficient at his job and was promoted quickly to the rank of Sergeant (E-5) before being honorably discharged in 1963. Al moved back to Maine, eventually settling in Westbrook where he raised his five kids with his first wife Priscilla, who predeceased him in 2009. In 1970, after a brief time working as a lab technician, he started a business in Portland called Mary Carter Paint & Wallpaper. After working six days a week for thirteen years, Al sold the business in 1983. He then worked at Nichols Portland for more than ten years before finding what would be the best job he ever had as a school bus driver for Falmouth. Unfortunately, Al developed Alzheimers and had to give up his beloved job in 2017. He continued to live in Westbrook until 2019 when his disease took away his independence and forced him to move into an assisted living community. How can one person--even Al himself--sum up the entirety of someone’s life in an obituary? The simple answer is that it can’t be done, but I will do my best. Dad was a fun-loving, passionate, hard working and loving person. You almost never saw all these attributes on full display at any one time. Like many parents of his generation, dad worked extremely hard to make sure that his family had all of their needs met: clothes, food, a roof over our heads and on occasion, he splurged and gave us something that we really wanted, but didn’t “need”. He worked six days a week at his paint store and then “rested” on Sunday’s by taking care of all the household repairs. Our family knew dad as a very hard worker. It wasn’t until after his kids had grown and he became a grandfather that he slowly transitioned into a more relaxed person and finally took time to enjoy the fruits of his labors. He almost never missed a grandkids tournament, dance, pageant or graduation. He was extremely proud of his kids and grandkids accomplishments. Dad had several hobbies that he really threw himself into. He was a collector of baseball cards, stamps and coins. One of his favorite gifts to give were newly minted sets of $2 bills and quarters. Dad had a love for organ music and always intended to be able to play more than one or two songs, but, putting in more time to practice just wasn’t a top priority. He purchased several motorcycles over time, taking as many rides as possible with his wife Judy and his riding club. He would often say that he was going out to take a spin and “shake the stink off”, a phrase that he permanently borrowed from his mother-in-law. Dad liked to drive all kinds of vehicles. Among his favorites was driving a school bus. His “kids” adored him and presented him with many hand-made Christmas cards and small presents each year. It is said that he rarely had to threaten to pull the bus over if the kids didn’t settle down, unlike the many times he had to pull the family car over to the curb when his own five kids misbehaved on family trips. Dad was a proud member of the Knights of Columbus for many years and served as the Treasurer for a time. He enjoyed being in uniform again when he had an opportunity to wear the Knights of Columbus ceremonial cape and plumed hat of a fourth-degree member. He was a staunch catholic that faithfully attended Mass and often served as an Alter Assistant at Saint Anthony’s in Westbrook. There were two, major, underlying themes in my father’s life. First, he enjoyed being of service to people. He worked very hard at providing for his family and doing the best job he could for his employers. Second, he truly loved to be with people. He loved to laugh--especially if it was at his own expense, which it often was. He knew a lot of people. When we were young we marveled at how many people stopped our father on the street, at a store or somewhere in our travels. We would jokingly ask him, “Dad, is there anyone that you DON’T know?!”. As it turned out, there weren't many. However, those that did know Al Doyon knew that he’d made a distinct impression on them. Al is preceded in death by both parents, his son Ronald, grandson Sean and great-grandson Leon. He is survived by his sister Gert and her husband Marcel Chasse of Lewiston, his wife of 27 years, Judy (O’Brion) Doyon of Gorham, sons Gerald and his wife Sandra of Westbrook, Marc of Westbrook, Dennis of Lewiston and daughter Christina of Cape Elizabeth. Also surviving him are his 14 grandchildren, four great-grandchildren, two nephews and more friends than we can count! Due to the current pandemic, the family will delay the Mass, celebration of life and funeral until such time as family and friends are able to cry, laugh and hold each other as we remember our time we had with him In lieu of flowers, please consider a donation to the Animal Refuge League of Greater Portland, arlgp.org/give.

The family of Albert "Al" Philip Doyon created this Life Tributes page to make it easy to share your memories.

Send flowers to the Doyon family.